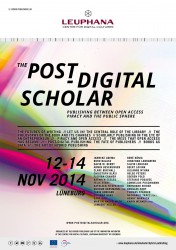 – Reblogged from the Hybrid Publishing Notepad –

Janneke Adema is a Research Fellow in Digital Media at the Centre for Disruptive Media at Coventry University and an outstanding expert on the topic of open access. She has conducted research for both the OAPEN Foundation and for the DOAB project, and is one of the authors of the OAPEN report Overview of Open Access Models for eBooks in the HSS (2010) and the DOAB User Needs Analysis (2012). Together with Pete Woodbridge, she has co-edited a living book on Symbiosis published with Open Humanities Press (2011).

Hybrid Publishing Lab: You did a research on publishing models concerning open access books in the humanities and social sciences. What is the biggest obstacle for open access at the moment?

Janneke Adema: I wrote a report for OAPEN (Open Access Publishing in European Networks) in 2010, in which I surveyed existing open access book publishers and the various business and publishing models they were experimenting with. One of the outcomes of that report was that most publishers were experimenting with an eclectic combination of models (hybrid, institutional support, freemium etc.). Instead of relying on one single business model for open access books almost all of the experiments choose for a pluralistic strategy whilst depending (substantially) on some kind of funding or institutional support.

However, the search for the sustainable open access business model is ongoing and the continued lack of such a model is often seen as one of the biggest obstacles for open access books. I think however that there are two kinds of problems with this kind of reasoning. First of all, there the issue of the term ‘sustainability’, especially when this actually comes to mean ‘commercially viable’. This neglects the fact that the publishing of books in the humanities has never been a sustainable or commercially profitable enterprise, and some sort of funding or subsidy has always been necessary. Second of all, I would argue that it is exactly the diversity of models that gives open access it strength and flexibility and that offers opportunities for experimentation with different forms of publishing. Most of the currently devised ‘sustainable’ models (such as APCs, as proposed in the Finch report for articles for example) mainly aim to support the interests of established stakeholders and to keep the system of scholarly communication as it has been functioning up to now in tact. However, for me open access provides us with an opportunity to critically and experimentally engage with publishing, and to critique and disrupt scholarly communication by offering a radical alternative to the large, profit-led firms that have come to dominate the field of academic publishing.

HPL: What do the various users of scholarly publications see as the potential benefits and drawbacks of open access books or articles (compared to non-open access literature)?

Adema: There are a variety of ‘users’ of scholarly publications, from scholars to librarians to the general public. One of the main benefits to all these groups is the increased access to and visibility of research open access brings with it. One of the main drawbacks continues to be the perceived lack of quality of open access publications, due to the fact that most open access publishers are relatively new start-ups without an established brand. To counter this perception open access publishers emphasise that their publications abide to the same peer review standards as closed-access publications. Another drawback of open access is that it is increasingly used as a mechanism to enhance the efficiency, transparability, and accountability of research, to stimulate the neoliberal knowledge economy. However, as I have also argued elsewhere, open access also offers us the potential to critique established (profit-driven) scholarly communication systems; to experiment with new affirmative forms of publishing; to rethink the book and the humanist understandings that accompany it; to reperform our scholarly practices; and to critically reflect in a continuous matter on the concept and practices of openness.

HPL: When you began with your current research you decided to put anything online as it developed. Could you share your experience with us?

Adema: Well, first of all, it is of course impossible to put everything online, but my aim has always been to share the research towards my PhD as widely as possible, through my blog, but also through open access archives and publications, as well as through various social media. The most important development in this respect is that when I started doing this, it was seen as quite radical and risky, where nowadays it has increasingly become normal for students and researchers to communicate their work online as it develops. However, there is still a lot of fear, especially amongst PhD students, that their work will be stolen, pirated or plagiarised. I think my focus is a different one though, as my aim is to communicate my work as widely as possible, and to experiment with different forms of communication. In that respect I don’t necessarily see piracy and plagiarism as negative mechanisms, but perhaps more as alternative ways to spread and communicate ideas: ways that at the moment, in our culture of individual authorship and academic responsibility, are seen as taboo.

In my work I have also been very interested in capturing the processes of doing research, and in showcasing the various versions in which research comes about: for example different drafts of my thesis have been put online in blog posts as they developed, but I have also presented my ongoing research online in various presentations, conferences, videos, remixes, wiki-books, podcasts, interviews, artist books, articles, books, tweets, translations, and what have you, mostly in a collaborative setting. This also shows how my work (and it is the ‘my’ that becomes problematic here) has been shaped, transformed and moulded by the various reviewers, editors, commenters, retweeters, remixers, and co-authors, and the various media (videos, podcasts, print on paper, ebooks), in which my research has appeared. I like to focus on the messy processes of doing research, instead of emphasizing the finalised product that comes out of it at ‘the end’ (in this case a PhD thesis and eventually a published book). My research has not been radically abandoning this trajectory, but by playing with its boundaries, it has attempted to recut the thesis’ potentialities, whilst exploring and stretching its possibilities along the way.

HPL: Which book will you always have as an analogue copy in your bookshelf?

Adema: I have a lot of beautifully designed print books that won’t easily translate to a digital copy, from a 3-part illustrated bible, to a selection of artist’s books. But even though I prefer to have my scholarly materials available in digital form, there are some exceptions, such as Katherine Hayles’ Writing Machines, Paul D. Miller’s Rhythm Science and Anthony Crafton’s Codex in crisis, in which the (print) design is integral to the content of the works.

Read our next Interview with Sven Fund, managing Director of De Gruyter tomorrow!
Our upcoming Conference on Publishing between Open Access, Piracy and Public Spheres is up for registration now. You can read all Interviews here.